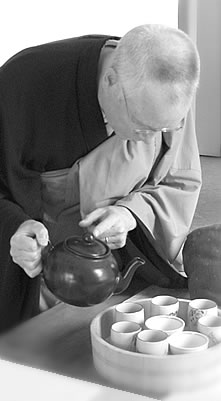 I became aware of Zen Buddhism for the first time in the dingy rows of the college library when I chanced to pick up D.T. Suzuki’s book “Zen Buddhism.” Although I wouldn’t return to consider Zen again for many years, I do remember feeling some very natural sympathies with the forms and philosophies it described. My childhood upbringing was Methodist and Southern Baptist. I had some meaningful experiences in these traditions, but it ultimately wasn’t ringing true to me, and Christianity wasn’t really a consideration for me going forward. I had intermittent “spiritual investigations” during medical school, but frankly, I was so thoroughly immersed in such an extensive, intensive, and consuming regimen of training to become a surgeon that I didn’t really have time or attention for much else. After completing college, graduate school, medical school, and surgical residency—I was 37 years old, deeply embedded in our culture’s roadmap to fulfillment, and not particularly satisfied. “If you work hard and succeed, you’ll be happy.” That’s what’s promised in this culture. After decades of doing just this and beginning to reap the fruits of my labors, I realized that material success did not make me happy. I turned within, began to meditate, and searched for a practice.

I found a book by Ram Dass, Journey of Awakening, that touched on several Eastern practices containing another description of Zen. Once again, it resonated with me. This time the reason was clear. Zen wasn’t about dogma, faith, commandments, or precepts handed down from on high. Zen is entirely based on a person’s direct experience. I decided that this is what I wanted to do—what I needed to do. In 1995 I joined Mountain Cloud Zen Center in Santa Fe, New Mexico, and began to practice with Pat Hawk Roshi, do retreats, and work on koans.

After Hawk Roshi took a sabbatical, Sensei Joan Sutherland came to Mountain Cloud. I worked with her for a number of years. During this time she graduated from Sensei to a Roshi and went on sabbatical. I started working more with John Tarrant Roshi and Susan Murphy Roshi in California. Murphy Roshi received transmission from John Tarrant and also from her teacher in Australia. I worked with this group until she returned to Australia. After this, I traveled to Australia to practice with Murphy Roshi’s group when I could. That took a lot of effort, and it became clear that I needed to have a teacher that I could work with closely and more intensively. Even though my practice at that time was strong, I was sitting every day and making several retreats yearly; I wanted a stronger relationship with a teacher, more time, and more intensive koan work. Fortunately, I found Musai Roshi in Santa Fe in 2003. He enabled me really to step up my practice. I surrendered to the process. I committed myself entirely to whatever schedule my teacher had. When he sat, I sat. When he did a retreat, so did I. When he traveled to other sanghas, I traveled too. I completed the koan curriculum with Musai Roshi in 2011, and he gave me dharma transmission, graduating me to the level of Sensei and empowering me to teach. In 2016 Musai Roshi gave me Inka, the final seal of approval for Zen Roshi.  Since then, I’ve begun to develop my own sangha in Santa Fe.

Our lineage is Soto Zen, transmitted through Taizan Maezumi Roshi who came from Japan to California in the early sixties. Maezumi Roshi started the Zen Center of Los Angeles and was my teacher’s root teacher. My teacher, Musai Roshi, received transmission from Roshi Jitsudo Ancheta, one of Maezumi’s twelve successors.

Our practice is a “lay practice.” I’m ordained as a priest. My teacher Musai Roshi is ordained as a priest. But we are not monks. We are not celibate. We have jobs, wives, families, and hobbies like ordinary people. There are Zen monks in the world, but the vast majority of practitioners are lay people. The Japanese priests typically spend one to five years in a monastery and then reenter the world. The big Japanese monasteries train priests who eventually leave to become teachers in other communities, usually marrying and having families. Many follow their fathers as the leader of a family temple. There are other types of Buddhist practices in Asia that are quite different, but in our Soto lineage, there is a place for lay practitioners. We have our worldly lives within Zen practice. We work to balance those two things. It’s difficult because having families, working, and making a living is very intensive. This is even more complicated if you have a schedule filled with retreats and daily practice. The point is, it can be done. And in my opinion, the more people integrate practice and daily life, the better for the world at large. Since then Walking Mountain Zendo has manifested in two previous physical locations in Santa Fe NM and now in the third form in Rapid City, South Dakota
after relocation in 2020.